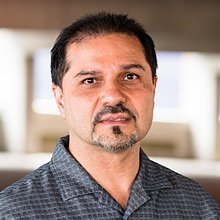 Orlando has been serving God for more than 40 years after his first encounter with Jesus at a Youth Conference. He attended church and youth group throughout high school but struggled to overcome temptation until he got involved with InterVarsity Christian Fellowship at Colgate University and learned to surrender his life in obedience to Christ’s Lordship.

During his Colgate years he served at a Small Group Bible Study Leader, Evangelism Coordinator, attended the Urbana Missions Conference and was chosen Chapter President by his Senior year. He graduated from Colgate University in Hamilton, New York in 1986 with a BA in Sociology and Anthropology and one month later did a Short-term Missions Trip to Honduras where his heart for Missions and Latinos grew immensely.

In the fall of the 1987 he moved to New York City, married Maritza and began serving as an InterVarsity Campus Minister at City University of New York (CUNY).  He now serves as National Director of InterVarsity Latino Fellowship, which now works  with 2500 Latinos students and 80 Latino Campus Ministers nationwide.   In 2003, he was ahead of his time when he authored a book entitled Being Latino in Christ: Finding Wholeness in Your Ethnic Identity, which has sold close to 30,000 copies and has helped thousands of Latino students become more confident in their identity, faith and service to Jesus Christ.

Also, in 2009, he was ordained by the New York Metropolitan District of the Christian and Missionary Alliance Church.  Currently, he travel extensively developing Latino student leaders, training Campus Ministers and speaking on college campuses on Multiethnic Diversity and Cross-Cultural Ministry and Leadership.  He also presently serves on the Board of the National Latino Evangelical Coalition (NALEC), a senior Leader of the Latino Leadership Circle in New York City and serve the C&MA Metro NY District Executive Committee.

Orlando has a Doctor of Ministry degree in Congregational Leadership from New York Theological Seminary since 2013.  For the future, he is interested in continuing to be a committed husband to his wife Maritza of 33 years and father to his two adult children (30 and 25). He plans to continue to invest in local church ministry in the Bronx and in the church without walls of The Passion Center, in addition to planting new LaFe Ministries in Hispanic Serving Institutions, serving as the National Director of InterVarsity Latino Fellowship.